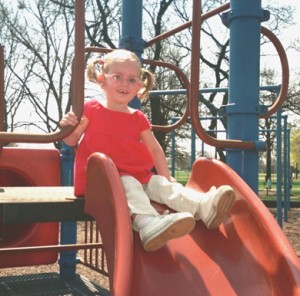 Maeve McNicholas was born on a cold, rainy day in May, 2002 which was so opposite of what her personality turned out to be.  Maeve became our sunshine. She was a sweet, calm baby that grew into an even sweeter toddler.  She was extraordinary in ways that are hard to describe to those that didn’t know her.  She had an amazing capacity to make us smile and always shared hugs and kisses with those she loved.  Even those that didn’t know her well would comment on her kindness.  In March of 2004, our family grew by two with the addition of Maeve’s new siblings, twins Billy and Nora. Maeve, who at that time was not even 2 years old, took the major change in her life in stride.  She showed little jealousy and constantly gave her new brother and sister kisses.  She was going to be the best big sister ever.  Our family was on top of the world – little did we know that soon it would change.

From the time she was born, Maeve was a very healthy child.  She suffered from relatively few colds and seemed to be spared many of the common childhood illnesses. Occasionally she had episodes of vomiting, but these episodes would be brief. She would get sick for a day and then she wouldn’t throw up again for another 6 months or so.  There always seemed to be a reason. She ate too much junk or she was at the babysitters with another child that just got over the stomach flu, etc.  All in all this probably happened only 3-4 times over a year and a half.  There seemed to be no reason for concern.

On July 25th, 2004, Maeve vomited when we got to a family party.  We attributed it to car sickness, because she had been in the sun in the car for almost an hour. She then appeared to feel better and played the rest of the day. The next day she vomited a few more times. We contacted the doctor who said to monitor Maeve’s condition and call back the next day if she wasn’t better.  She got worse during the night so we brought her to the doctor the next day.  The doctor said to take her to the ER to be treated for dehydration.  That’s all they thought it was – dehydration.  When she didn’t “perk” up in the ER, they decided to keep her overnight for observation. Soon after, she had a seizure and then a few minutes later another one.  Maeve looked at my husband and myself and said “It’s okay”.  Those were the last words we would hear Maeve say before they sedated her. A few hours later we were informed by the doctors that there was a “significant” mass in her brain.  We still had hope, Maeve had a lot of spunk, we could fight this. After waiting through an agonizing night, we met with the neurosurgeons the following morning.  They planned on performing surgery to remove the tumor; however that was not to be.  Maeve’s condition never became stable and the swelling in her brain, despite the placement of a shunt, caused too much damage.  She went to Heaven at 4:37 am on July 29th, 2004, less than 36 hours after being diagnosed with a brain tumor. Maeve was only 26 months old.

This disease didn’t give Maeve a fighting chance.  She lost her battle before she even knew it began.  We need to continue to fight this battle for her and for other children and families, so that they may never live through our nightmare. Nobody should ever have to say “good-bye” to their child.  Our lives are forever changed.  We will always, always ache for her and long to hold her and hear her sweet voice.  PLEASE help increase awareness and funding to learn more about pediatric brain tumors.